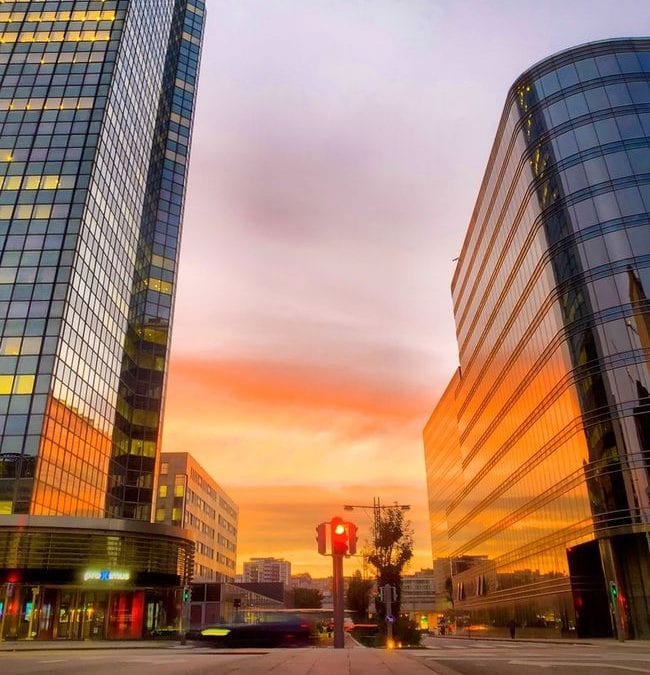 Now that the kids are getting older, we are out in nature more often, and try to go for short or long walks more often. Sometimes we drive towards beautiful nature reserves in in other part of Belgium, or in The Netherlands, but more and more often, we try to discover more of the beautiful spots of nature that are in our own neighborhood. It’s typical, beauty in your own neighborhood is often overlooked, but we have the excuse that we have not been living there for THAT long…

This is one of those newly discovered beautiful spots of nature in the neighborhood. As is typical in the area, it is the remainder of clay mining, and since clay doesn’t easily let water pass, most of these clay pits have become ponds, and creating beautiful places for both fauna and flora. Such as this one. But during the hot summer times, the water easily evaporates, resulting in dramatic looking landscapes. Such as this one.

I was actually shooting pictures using my Fujifilm X-E2, but as I often do, I also tried a few using my iPhone X and Procamera HDR. The Fujifilm X-E2 pictures came out just great, and are being processed to be sold for stock. But for social media, bold colors tend to work better (or at least, on my profiles they do), so I uploaded this one to Instagram and Facebook and the likes. And yes indeed, it sure got the likes! A lot of them even!

What the secret ingredient is? Not in particular the colors I believe, as most of my Instagram portfolio is rather saturated in colors, but the piece of wood in the foreground, as it creates a great leading line, and a sense of depth into the scene.

For postprocessing I used Lightroom CC Mobile to add some extra contrast and saturation.

Under a burning sun . A dry shore next to the water, the duality of life

The sky is a never ending source of creative inspiration. Every day, we are treated on a new painting in the sky, sometimes with many different warm and saturated colors, sometimes with many, or even just one single shade of grey. And if you’re lucky, like I am, and you live near a body of water, you don’t just get that skypainting once, but you get it double! I mentioned it before, but seeing reflections is key to great photography. Don’t believe me? Check out the cover of this book of one of the masters, Joe McNally (No really, check it out, great picture, and one of the best books on photography you can read: The Moment It Clicks!)

As usual, it was taken while bringing my daughter to school, using the iPhone X and Procamera HDR. However, in postprocessing, I tried something different in Lightroom CC this time… Instead of making the colors pop really hard, and saturate the lot out of them, I tried a but of desaturation on the yellow and orange tones. The scene at that moment was actually more saturated than it is in this picture. Most of the time when I try out a different postprocessing style than the saturated colors, I am punished for this on social media. And actually, for this one too, as it didn’t get that many likes on Facebook and Instagram. But the 500px people liked it a lot! 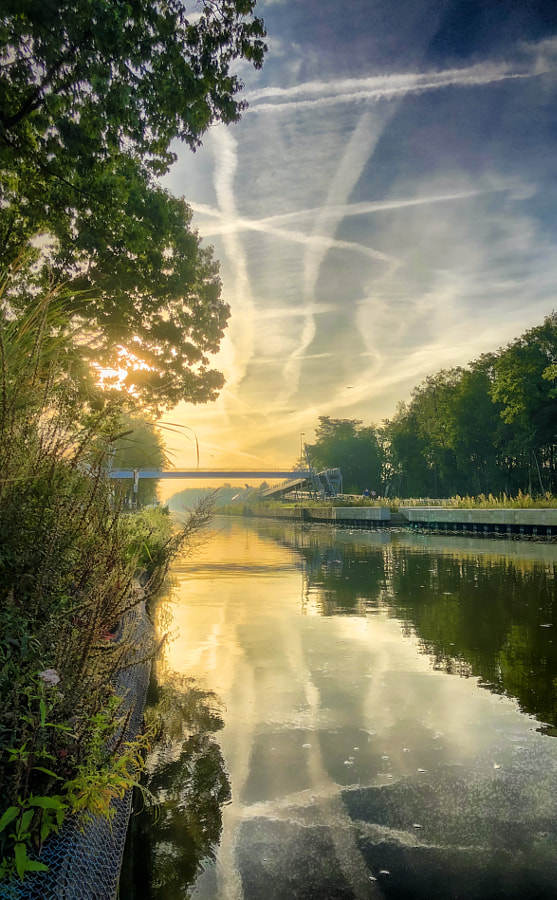 Gratefulness is an important thing in a human life, and I am become more and more aware of that. Instead of a standard complaint-attitude when something happens, I try to tend more towards a grattitude-attitude. Like when I’m in a traffic jam, I am grateful, since it gives me more time to listen to an audiobook or some great music, or talk some more with my lovely wife. Or when a detour comes up on my commute, I enjoy seeing new places and things I hadn’t seen before. The same goes for train delays, instead of nagging and complaining for the rest of the day, I try to see them as photo-opportunities, and honestly, quite often they are…

Take the day on which this particular photograph was shot. The train had a delay, and due to that, I wasn’t able to take the regular route I walk in the morning, but had to take a shortcut. This shortcut led me to the side of the office building, at the exact time the dramatic sunrise was visible in the sky. Had I been in a bad mood, I wouldn’t have made the walk at all. Or I would’ve been walking with my eyes down, facing my iphone’s screen. But now I was simply grateful for allowing me to get to know a new route, a shortcut. And what I saw next was unbelievable, the most beautiful city sunrise, but not just once, but twice, as it was wonderfully reflected in the glass wall of the office building.

So out came the iPhone X, and on came Procamera HDR. I shot a few frames both in landscape and portrait, and from different angles. But this is one of the better results, and I think the low position of the camera adds to the overall feel of the picture, drawing you inside of the street scene.

Postprocessing was done using Lightroom CC where some extra contrast and saturation was added, and the shadows were brightened up a bit, to give an overall warmer and painterly feel to the image.

The best selling image of this month is the proof that it doesn’t take travels around the world, or big setups to shoot stock photos that sell.

This one was taken on a day out on the beach with the family and friends. I noticed the bag of a friend, and saw that the color of the Jeans fabric fitted well with the bright blue sky. So I placed it on an empty piece of the beach, and shot a few pictures of it, both in landscape and in portrait. Some with some unrecognizable people in the background, some without anyone in it.

Even though the picture was shot over 3 years ago, I only came to keywording and uploading it a few months ago. Yes, I know, our backlog is immense!

The image was shot using our Fujifilm X-E1 and 18-55mm zoom. I also shot some more up close using the 70-200mm tele. When shooting a stock photography idea, I always try to shoot as many variations as possible, as this of course only increases the chance of selling. Say for instance, that this picture was the single one photo that the editor needed to go with that high profile article in that superduper magazine with a worldwide coverage. But, instead of landscape, he needs in in portrait, because of the layout of the magazine…

If you want to check out more about the gear I use for my Mobile Photography, you can check it on this page: https://shor.by/MobileGear

All pictures that you see here, are available for sale via stock agencies , or print via our Smugmug page. If you have special requests or considerations, feel free to contact me. 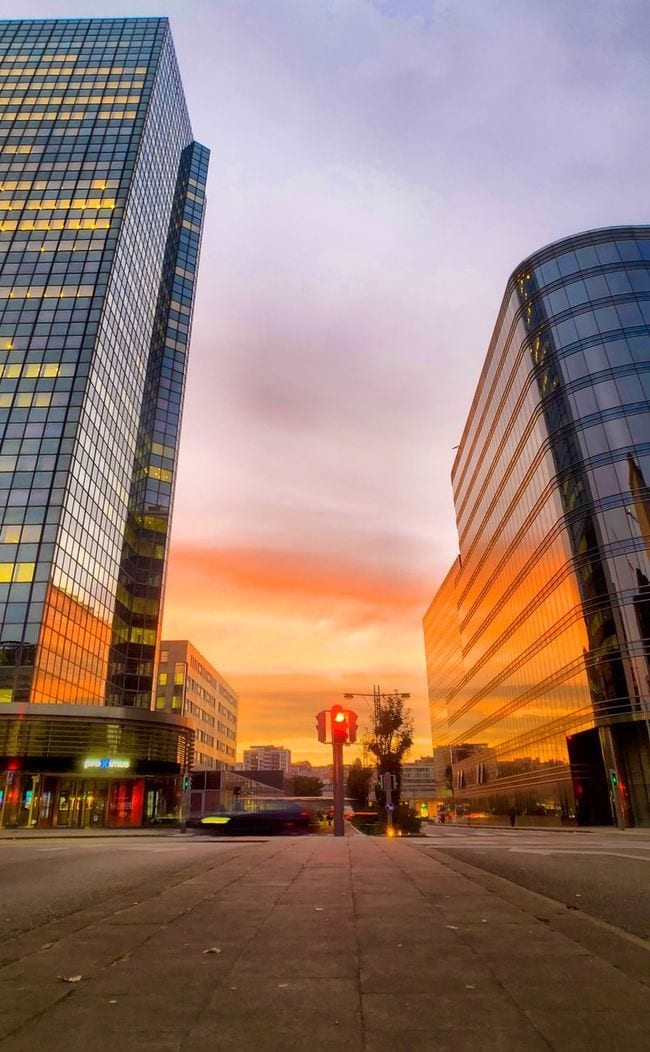